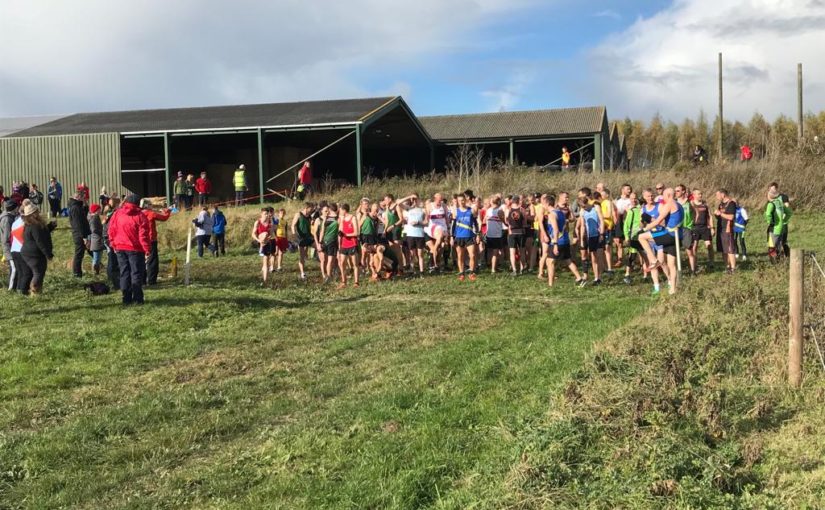 Last weekend was Match 2 of the Lincolnshire Runner XC League. Following some good runs at Match 1, athletes were ready to tackle the tough, traditional cross country course that includes its notorious ‘water jump’.

The U11s were the first to run, competing over the 1.4 km route. Thomas Broadley continued his great form with a 4th placing, whilst Lara Hindmarsh came in 12th in only her second XC race, and Meriel Sheard followed in 13th place. Grace Marshall (19th) finished very strongly moving up several places in the home run.

This race was followed by the longest race of the day at 10.1 km which included the U20, Junior, Senior and Veteran Men. The trio of William Tucker (U20), George Hatton (U20) and Dave Eldridge (Vet Men) represented GAC. William was looking for revenge after being pipped into second at match 1, whilst George was looking for a top 10 placing. With both runners still 17 this XC distance is new, with a field of very seasoned runners. William had a great run leading from start to finish to take the win, whilst George gave a fantastic performance to get 10th overall. Dave Eldridge, who introduced William, George and many young athletes to the sport, and is an inspiration to all, came in 72nd.

Next up was the 2.5 km race for U13 boys. Again two new entrants to XC running, competing for the second time was Jack Pemberton and William Hindmarsh. Having learnt from match 1, Jack and Will paced their runs better, finishing very strongly in 4th and 14th place respectively.

Euan Rodell, whilst only being U15, is a veteran with many successful runs in his legs, and Sunday was no exception as he battled over the now very churned up 4.5 km course, coming second, setting the bar high for his brother who followed this race in the U17 age group.

Rori Rodell had to take on the water jump three times over his 5.8 km race, and even took a ‘drink’ on one occasion, not advisable after hundreds of runners have been there before! This final race was exceptional with a sprint to the line and second place for Rori.

This was a great day of successful competition for Team GAC, and sets them up well for Match 3 at Belton.

This website uses cookies to improve your experience while you navigate through the website. Out of these, the cookies that are categorized as necessary are stored on your browser as they are essential for the working of basic functionalities of the website. We also use third-party cookies that help us analyze and understand how you use this website. These cookies will be stored in your browser only with your consent. You also have the option to opt-out of these cookies. But opting out of some of these cookies may affect your browsing experience.
Necessary Always Enabled

Any cookies that may not be particularly necessary for the website to function and is used specifically to collect user personal data via analytics, ads, other embedded contents are termed as non-necessary cookies. It is mandatory to procure user consent prior to running these cookies on your website.