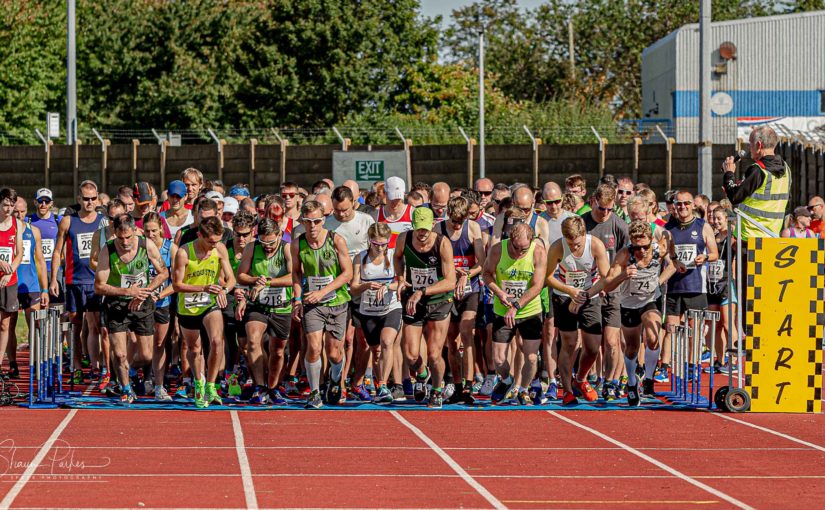 More than 50,000 runners competed a half-marathon in the Great North Run on Tyneside last weekend, but a little closer to home, a field several orders of magnitude smaller were covering the same distance on a course that’s acknowledged as considerably more challenging.

318 runners completed the Newton’s Fraction Half Marathon on Sunday 8th September, rising to the occasion with course times ranging from 72 minutes to just over three and a quarter hours. With a reputation as a tough but enjoyable and well-organised event, the Fraction drew entries from clubs throughout the local area and from as far away as London, Chichester and even one of the American students from the University of Evansville campus based at Harlaxton Manor. This is the second year that the Fraction has taken place in September, having moved in 2018 after being postponed by conditions from the so-called ‘Beast from the East’.

Last September, runners were faced with temperatures of 25 degrees with little cloud cover. This year conditions were predicted to be between 12-14 degrees during the race – perfect for running – but on the day were a few degrees warmer. Runners reported being glad that the two big hills on the course were shaded by trees as it made a considerable difference while tackling the most challenging parts of the route.

The annual road race started at the South Kesteven Sports Stadium on Trent Road – the only half marathon in the region to start and finish in an athletics stadium – before heading out via Barrowby to a three mile stretch of canal, finishing at the Dirty Duck. The halfway point in the race was in Woolsthorpe-by-Belvior at which point the runners faced the first of the two major hills – heading up Cliff Road towards Denton. At Denton the course takes a sharp left onto Casthorpe Road. At the junction with Denton Lane, the course turns ninety degrees to the right and the long drag up to Casthorpe Hill, which is an exhausting 54 meter elevation climb up a 12% slope at the ten mile-mark.

First home and winner of the men’s race was senior Jake Richardson in 01:12:12, a personal best for the Lincoln Wellington AC athlete. “I’m really happy!” he said after collecting his award. “I only went out there to do it as a training run because I’ve not done anything for a few weeks, but it felt alright. I had nice competition from Luke Harrison at the start. I’d just like to thank all the organisers that have arranged a cracking event!”

Second-placed Harrison, in 01:17:55, claimed he’d eaten too much to eat for breakfast and lacked the leg power to get up some of the hills. “If they could shave some of the incline off for next year, that’d be much appreciated,” he joked. “It’s days like this where all those miles you put in on your own, when its wet and windy and first thing in the morning, seem worth it.”

Third place went to Chris Limmer of Grantham Running Club, another senior, with 01:20:02. “It was my quickest half marathon in about three years. I’m slightly surprised to be on the podium, but I’m absolutely buzzing! I love the atmosphere and I love the hills; GAC always put on a fantastic race!”

Winner of the women’s race was senior Nora Battermann of West End Runners in 01:29:45, position 26 overall, and her personal best for the distance. “I really enjoyed it,” Nora said. “It’s the second time I’ve run it but the hills just don’t seem to get any easier! I’m astonished I managed to win and would like to thank the organisers, the fantastic marshals and everyone involved in the race! I’m sure I’ll come back!”

Eye Community Runners’ Samantha Cullen was second in 01:29:51 (28th overall), while Jessica Cocker of Cambridge and Coleridge AC came in position 43 overall to be the third-placed woman with a time of 01:33:40. “I really enjoyed the Fraction half,” said Jess. “Though the hills were a bit of a shock to someone used to training in Cambridge! Definitely recommended, a well-organised and friendly event!”

The team prizes are awarded to the club with the quickest first three athletes by gender. The women’s team prize was won by Grantham Running Club for the second year running, pipping Lincoln Wellington Athletic Club to the top spot and the men’s, also for the second year running, went to Holme Pierrepont RC, beating Grantham Running Club’s men by just one point.

Age-banded prizes were awarded as follows:

Run Director and President of Grantham Athletic Club Dave Eldridge said, “It was a perfect day for the race. The change of race day from March to September has proved to be the right decision and this will continue in future years.  Many of the runners spoke to me after the race and commented on how well organised it was and how much they enjoyed the racing experience. It was great to see the winner of the race, Jake Richardson, who started his running career with me when he was 8 years old, training on the hills around Belmont Tower.

“Grantham Athletic Club would like to thank the marshals, Inspire+ and the host of support staff for their hard work and expertise without which, this race wouldn’t happen. Our grateful thanks go to our sponsors, Lincolnshire Runner, Eat Natural, Brewsters Brewery, Addidas, Living Health, ZeroKnots, Buzz Bingo, the Canal and River Trust for their assistance in putting on the event. We’d also like to extend our sincerest gratitude to the people of Grantham for their continuing support of the Fraction, particularly those affected by road closures. Finally, of course, we’d like to congratulate all of the terrific athletes that came and made this race so special.”

Full results for the Newton’s Fraction can be accessed from http://www.chiptiminguk.co.uk/results/newtons-fraction-half-marathon3

Newton’s Fraction will return in 2020.